The bar chart below shows the number of visitors to four London museums. Summarize the information by selecting and reporting the main features, and make comparisons where relevant. 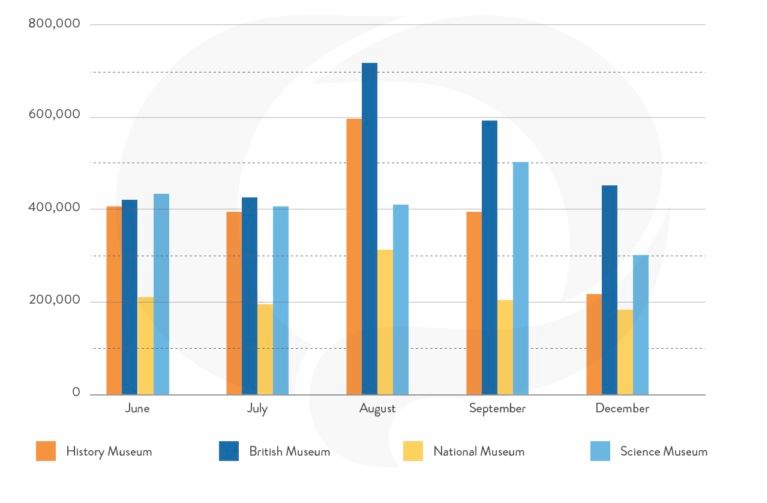 It is clear that the British Museum almost always led in popularity, whereas the National Museum was the least prevalent choice for visitors in these months. In addition, visitor numbers fluctuated over time, with August seeing the highest visitor volume in all these sites apart from the Science Museum.

In the first two months, there were hardly any changes in the popularity of the four places as the History Museum, the British Museum and the Science Museum received about 400,000 visits each, while visitor numbers to the National Museum hovered around 200,000.

However, the remaining months witnessed more remarkable changes, with the figures for the History Museum, the British Museum and the National Museum soaring in August to peak at 600,000 visits, roughly 710,000 visits and slightly above 300,000 visits, respectively, before dropping substantially in September and December. Meanwhile, there was no change in the number of visitors to the Science Museum in August, which was followed by a marked rise to a high of 500,000 in September and a noticeable fall to merely 300,000 in December. It is worth noticing that visitor traffic to both the History Museum and the National Museum was also lowest in the last month, at only 200,000 visits, more or less.

Pros and cons of homeschooling

People say that a country will benefit greatly if some of its students study...

Economic progress is often used to measure a country's success. However, some people believe...

Some people think that mobile phones should be banned in public places like libraries,...