The diagrams below show the development of the horse over a period of 40 million years. Summarise the information by selecting and reporting the main features, and make comparisons where relevant. 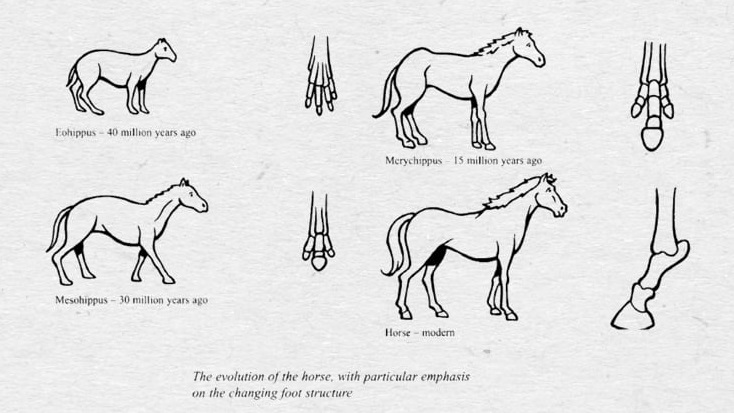 The picture describes the horse’s evolution from 40 million years ago until now, focusing on the bone structure of its foot. Overall, as the animal gets more prominent in size and longer limbs, the toes disappear one by one, eventually replaced by a sole hoof.
Eohippus, which existed circa 40 million years ago, was the ancestor of the horse. It was much smaller, standing at about one-fourth the size of a modern horse. All four legs and the tail were relatively short, and, on each paw, there were distinctively four toes. About 10 million years later, the Eohippus became the Mesohippus, which was slightly larger and taller. The foot had lost one toe, and the middle toe had enlarged to create a symmetrical structure. Notably, the Mesohippus had started to develop what would become the horse mane.
At around 15 million years ago, the Merychippus appeared. This pre-historic horse largely resembled the modern horse but at about half the size. The foot still had three toes, but the middle one was greater in size and protruded more to the front. The mane had also become more visible. Finally, the horse today has all the toes reduced just to a single hoof. It is taller, with lengthier limbs, a more defined tail, and a clearer mane on the neck.