The map shows the changes to a residence hall between 2010 and the present. Summarize the information by selecting and reporting the main features, and make comparisons where relevant. 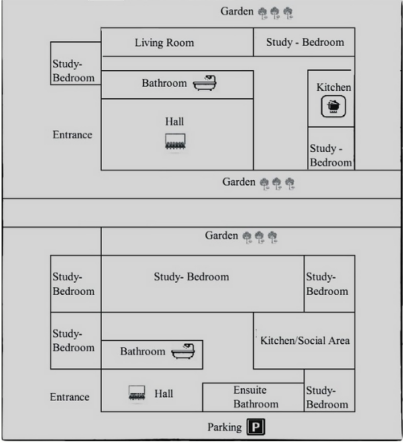 The given maps depict how a residence hall has changed between 2010 and the present day. It can be clearly seen that the hall’s layout has become significantly different, with more private rooms at the cost of shared space.

In 2010, the hall was designed with three study/bedrooms, one bathroom, one kitchen, one living room and one main hall. The main hall was directly accessible from the entrance in the west of the residence hall; opposite it was the kitchen and a study/bedroom. To the northeast, there was another study/bedroom, whereas the living room and bathroom were lined up along the corridor that led to the last study/bedroom in the west of the building. Outside the residence hall, there were two patches of the garden to its North and South.

At present, while the entryway is still located in the west, it has become noticeably narrower, and so has the main hall that it leads to. The kitchen has expanded to also act as a social area for all residents, and understandably, the living room was no longer needed because of this change. It has been repurposed into another study/bedroom, making a total of 5 private rooms together with an additional one in the west, by the entrance. A private room in the southeast corner of the building next to the kitchen notably features an en-suite bathroom. Outside the building, a parking lot has replaced the garden patch in the South.

“You cannot swim for new horizons until you have courage to lose sight of the shore.”