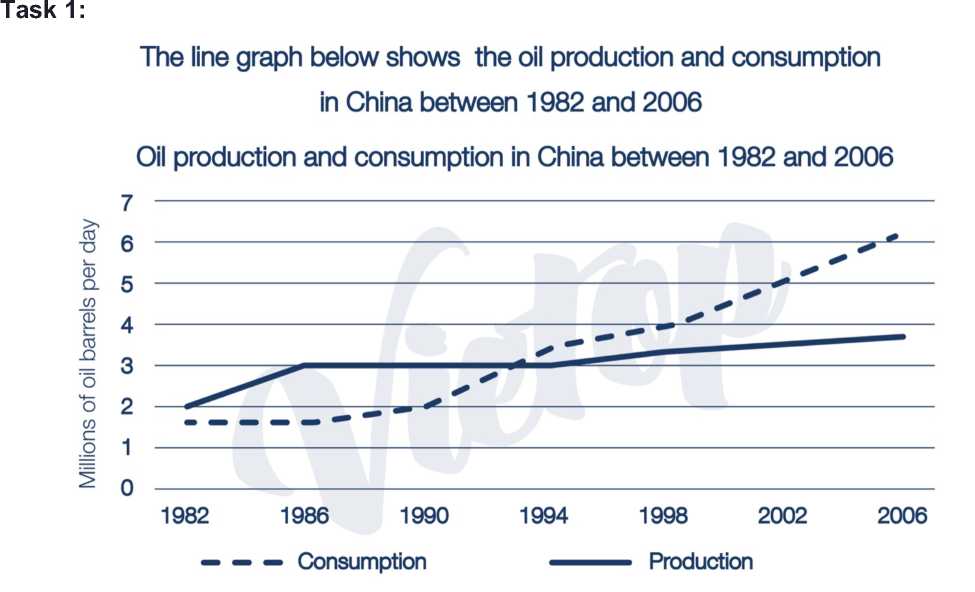 The line graph details the amount of oil produced and consumed in China over the 24-year course from 1982 to 2006.

The initial impression from the chart is that China generally consumed more oil that it could actually produce over the given period. It is also clear that both figures experienced overall increases, despite the fact that oil production underwent around 8 years of stability.

In 1982 around 1.8 million oil barrels were consumed and 2 million were produced. Over the next 12 years, whilst oil production rose gradually to 3 million in 1986 and subsequently stagnated at this point until 1994, oil consumption underwent a steady rise, with its figure increasing to 3.5 million in 1994.

From this point onwards, the amount of oil produced maintained its upward streak, albeit at a moderate level, and eventually it reached its high of 3.8 million in 2006. The figure for oil consumed, meanwhile, surged with an exponential gradient, making a more than two-fold leap in the last year alone, by which time it had reached almost 6.1 million barrels, relatively higher compared to the figure for oil production.

“I may not be your first date, kiss or love…but I want to be your last everything.”